Sustainable forestry shows how land use can help climate change 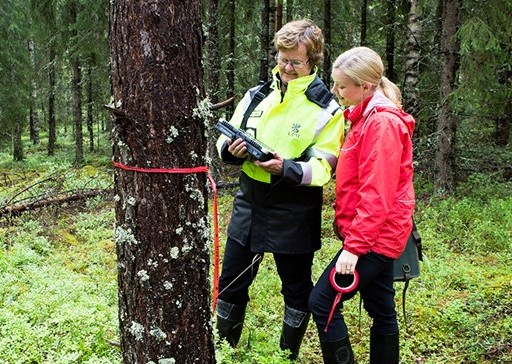 Sustainable forestry shows how land use can help climate change

Land and the climate interact with and influence each other. That means, to fight climate change, humans must change how they use the land. Sustainable forest management is one way forward.

Preventing the worst consequences of climate change (which, according to most scientists, requires limiting global temperature rise to less than 2°C) requires massive and sustained changes, across all sectors of industry and society. Dependence on fossil fuels must be reduced and new forms of transport explored.

It is also increasingly apparent that we must change the way humans use land. A recent report by the Intergovernmental Panel on Climate Change (IPCC), an international body dedicated to explaining scientific opinion on the issue, detailed the ways in which land and the climate interact with and influence each other. Land use can mitigate against climate change, or fuel it further. Land sequesters nearly a third of the carbon dioxide emissions that humans create, but 23% of those same emissions come from land uses like agriculture and forestry.

The need to optimise land use for the sake of the climate is complicated by the fact that many potential changes, such as decreasing agriculture, would increase food scarcity and poverty - issues already exacerbated by climate change. There is one area, though, where the best solution is to have more of something already done well: sustainable forest management.

Forests can hurt, or help

According to a recent IPCC report, improved forest management is one of the few (nine out of 40) courses of actions that would bring significant benefits for a wide range of challenges, including mitigating against climate change, adapting to it and improving food security, land degradation and desertification. What constitutes good forest management varies according to where the forest is and its planned use. For tropical forests, such as those found in Africa and Asia, and rainforests, like the Amazon, the main goal is stopping or reversing mass deforestation, which is typically done to make space for agriculture. This is achieved through burning, which releases huge amounts of carbon. Additionally, in temperate zones, deforestation has a warming effect on the climate in general.

For boreal forests, conscientious but active management is the best solution. Pam McElwee, a professor of human ecology at Rutgers University, was one of the lead authors of the IPCC report. She says: “If you leave certain forests alone, including boreal forests, and you don’t do any harvesting, eventually the carbon storage starts to decline, because you basically reach a saturation point.”

Instead, trees should be carefully thinned and logs removed, with the right type of trees replanted at the right place and time. If the harvested wood is used for a lasting product—such as in construction, for furniture, or for paper—then the carbon is not released but instead remains locked in, and “keeps the carbon where we want it”, McElwee says. “Active management is really important,” she adds, explaining that it also helps prevent out-of-control forest fires, something that global temperature rises increase the risk of.

Such active management—incorporating thinning, selective wood harvesting and replanting—is central to the type of forestry that UPM practices in Finland. Sami Oksa is responsible for stakeholder relations and environment concerns at UPM Forest. He explains: “We take care to make sure there is no deforestation after wood sourcing activities. Where we operate ourselves, we do regeneration after harvesting operations. Where others are operating [UPM manages substantial tracts of privately owned forests], we help them to do regeneration, in one of the ways that is suitable for the area.”

UPM is also careful to preserve biodiversity in its forests, which makes them more sustainable in the long term. Outside of Finland, UPM manages plantations in Uruguay that have been converted from degraded grazing lands, greatly increasing the carbon sequestered by these areas.

Part of the solution, but not all of it

UPM’s practices aren’t perfect, as Sami Lundgren, Vice President of Responsibility, points out. One area that the company is anxious to improve on is its use of fossil fuels, which is a problem across all industries. Fossil fuels contribute greatly to the 77% of human-caused emissions that the IPCC does not attribute to land use, such as agriculture or forestry. Lundgren notes that fossil fuel usage “is an area we should concentrate on”. “We are trying to reduce the energy used from fossil fuels,” he says, adding that the company is increasingly focused on using and generating energy from carbon neutral sources. Additionally, UPM also has a role in bringing more products that help society to mitigate climate change, to the market.

Sustainable forestry, and better use of land more broadly, will not mitigate against the climate crisis on its own. Land use “is not everything,” McElwee says. “But it is pretty substantial. If we do a better job of managing these natural systems, we will be at least part way towards, for example, reducing down to net zero emissions, which is the mid-century goal for a lot of countries.”